I decided to pursue an exploration around the form of a toy car, after having read about Matteo Ragni’s project, and the TobeUs exhibition “100% TobeUs: 100 designers for 100 new toy cars”. The project gathered 100 designer friends, each starting with the same block of wood to create their own design. The resulting cars made up the collection of 100 artefacts, each unique in their own way. Iterations of sorts, this got me thinking about the nature of the item (a toy car), and the creative freedom tied to products for children (in their shape, colour, material,etc).

As an object traditionally hand-crafted out of wood by an artisan, the idea was iterate around the form using CAD and 3D printing. Following tradition, the design first began with a block of wood, in the wood-workshop. Plywood was sandwiched between two other blocks, using the woods layered aesthetic to mimic some racing stripes. The form was sculpted using chisels and files letting the process shape the final outcome. Contrasting the craftsmanship associated with wood, the wheels would be 3D modelled and printed from PLA.

The initial wheels were modelled on Solidworks and printed, serving as the basis for further exploration. This mainly took place within Cura, where the ability to generate support structures was used to “fill” in a hollowed wheel model. This created the rims of the wheels automatically, with the ability to iterate quickly. As well as creating wheels with distinct looks, each support structure had varying structural integrity, leading to wheels with different levels of stiffness. A wheel was then designed as the embodiment of this notion of stiffness and springiness. To explore these structures further, a new car was modelled. The shape is essentially the top surface of a car, and was designed as free-floating. Once again in Cura, the support structures then “filled” in the shape. The resulting lines efficiently conveyed the idea of movement, while also resembling a roll-cage. 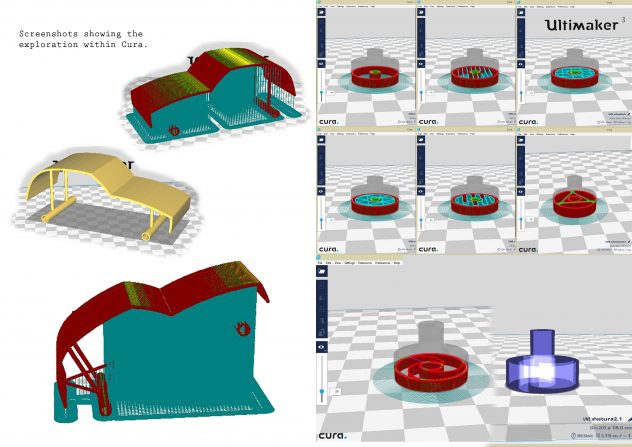 As a continuation of this, and as a method of iteration, the car was parametrically designed using Design Tables within Solidworks. The use of design tables gave way to a variety of designs, ranging from forms that resemble actual cars, to more abstract and futuristic shapes. Using design tables highlighted the importance of planning and forethought in regards to the modelling process. Several issues arose, where finishes such as fillets and chamfers would cause errors in the geometry; this was fixed by applying such finishes to each iteration individually. Returning to wood as a material, these designs could be appropriately CNC manufactured, with the wheels 3D printed. More playful in appearance, they step back from an over-functional/realistic look, and return to the original stimulus and context, that is a toy car. 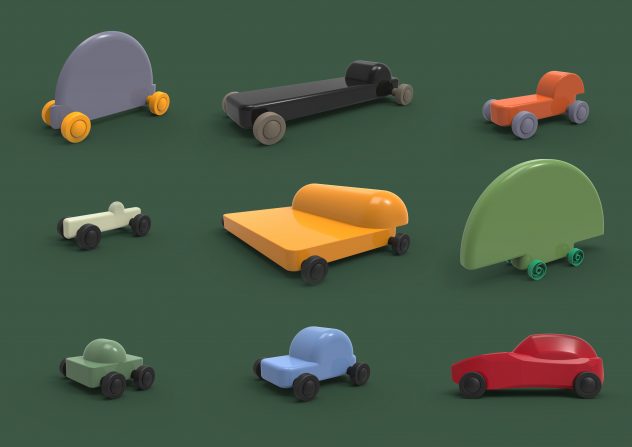 The two final artefacts reflect this departure away from, and back to a play-thing. The first one is more of a sculptural item, printed and then cast out of aluminium, with the supporting beams designed to reflect support structures from the FormLabs printers; the silhouette for this was based on a Citroen Dyane.

The second artefact, or collection of artefacts, are the series of wooden cars parametrically designed, creating a family of products. 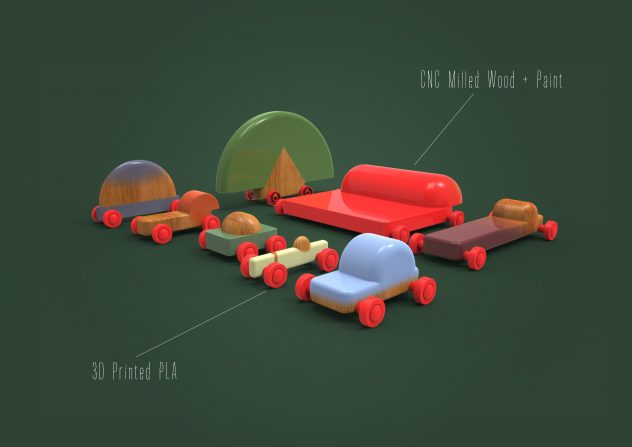 Video of 三°S (Three Degrees of Separation) by @